Ohmygosh!  I made this card in January, but for some reason I didn't click publish!  It was still listed as a draft!  So, the baby in question is actually a month old!  And by the way, she's absolutely beautiful.  Mama and Daddy are truly blessed with a sweet little princess.  <3

Ok, this post needs a little explanation.  I've had the same best friend since I was about 14 years old.  When she got married in 2004, her last name became Sparks.  And when I met MY husband in 2006, he became best friends with her husband.  They were the best man and matron of honor at our wedding in 2007.

Now, my friend has never been a big fan of babies or really small kids.  I have never gotten the impression from her that she would ever be interested in having children of her own, however, I've always known that her hubby wanted kids.

It was still a surprise to me to find out last week that they are expecting a baby this June.  I'm so excited I can't even begin to tell you!!!!  A little baby Sparks!  I just can't believe it!!

So, naturally, I had to make them a congratulatory card for the occasion! 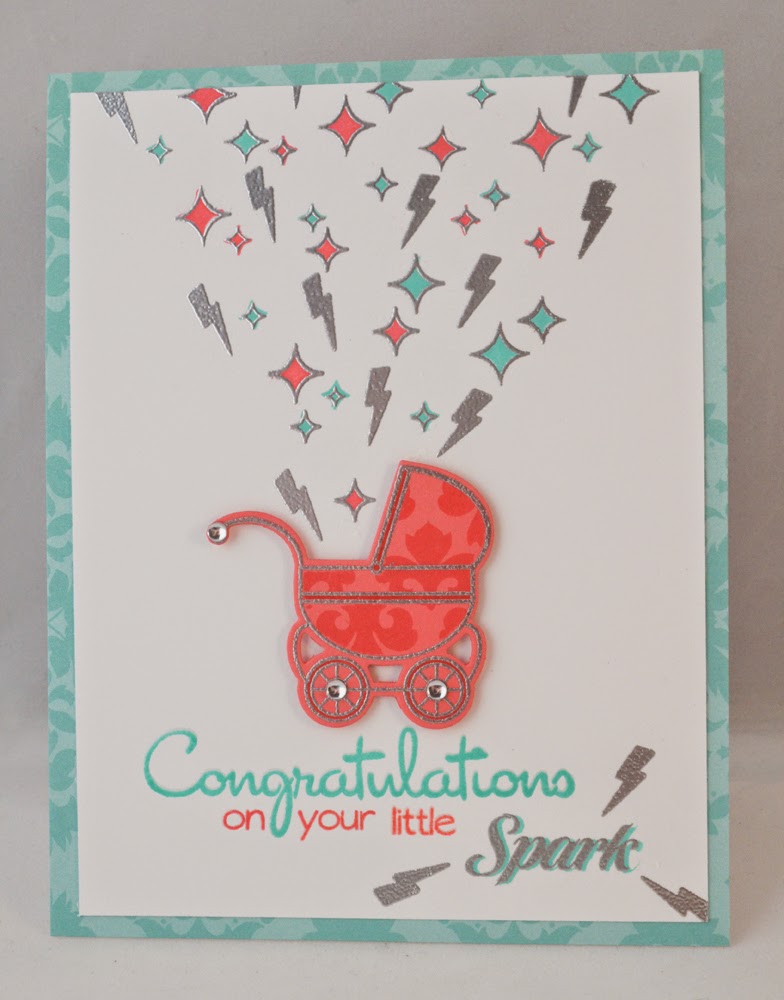 I used stamps from a variety of companies:  Winnie & Walter for the little diamonds or "sparks" flying from the baby buggy, MFT made the little lightning bolts, PTI made the baby buggy, and My Thoughts Exactly for the majority of the sentiment.  The word Spark is from a Hero Arts stamp set, but the stamp actually says Sparkle.  I just masked of the "le" and only inked up the the "spark".

All of the papers used are from Papertrey Ink. 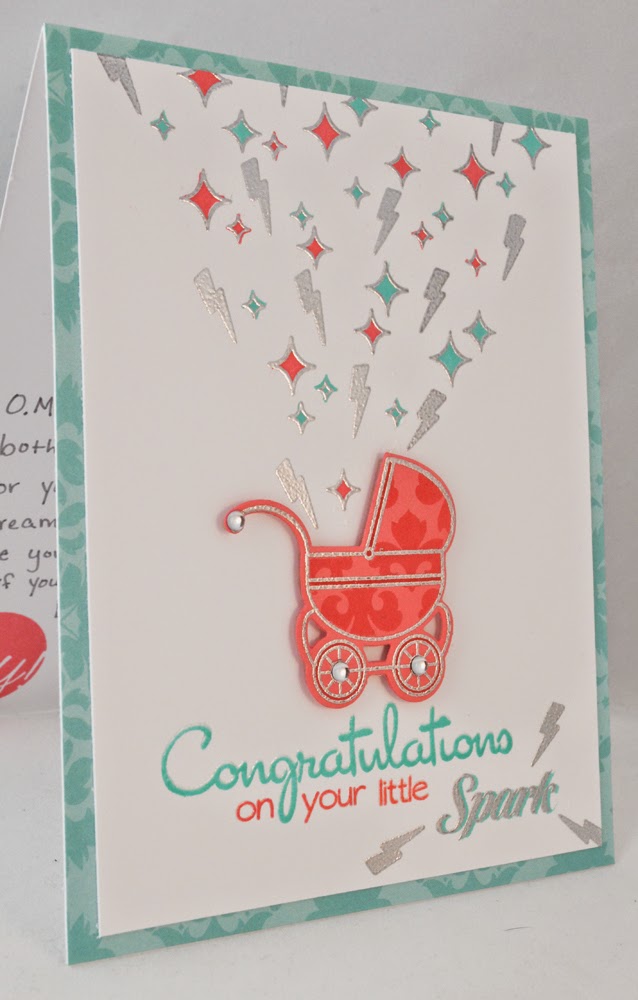 The sparks and lightning bolts, the baby buggy outlines and the word Spark are heat embossed with silver powder to make them shine.  I wanted them to seem like they were electric or something. 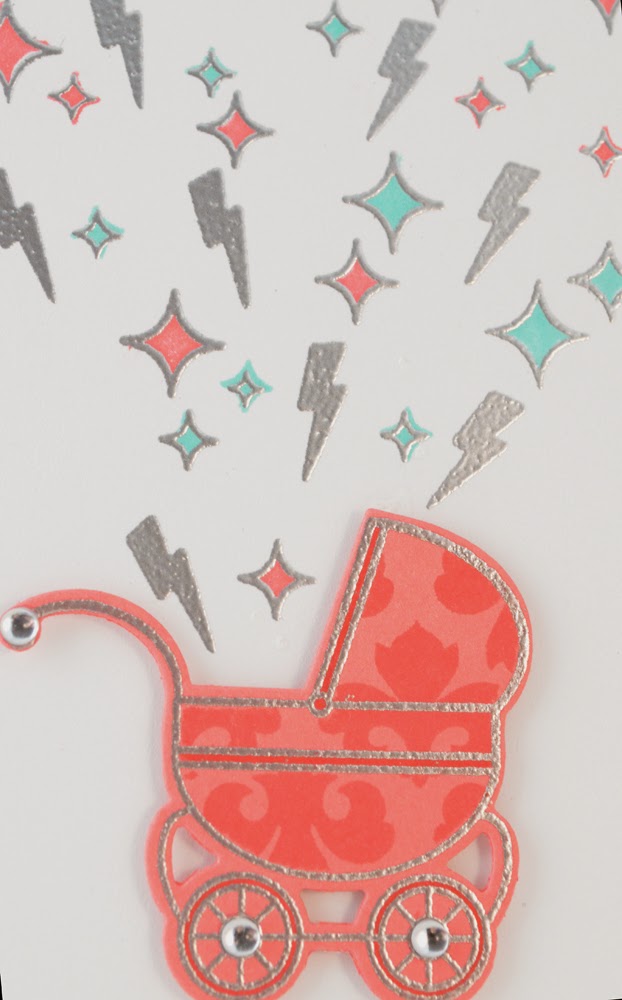 I created a mask for the baby buggy that left only the body of the carriage and the bonnet exposed so that I could stamp the pattern on it.  Then I used a dry water brush and ink to paint the stripe, the edge of the bonnet and the wheels. 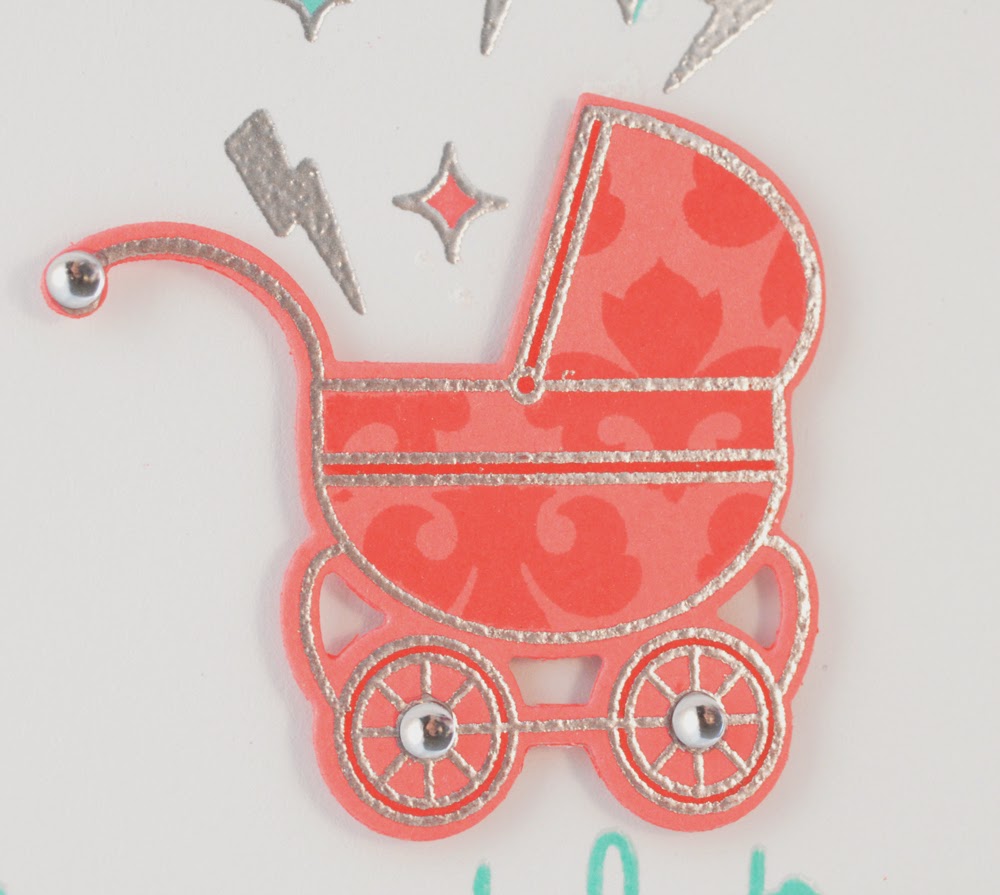 I also added some clear mirrored pearls for a little extra bling. 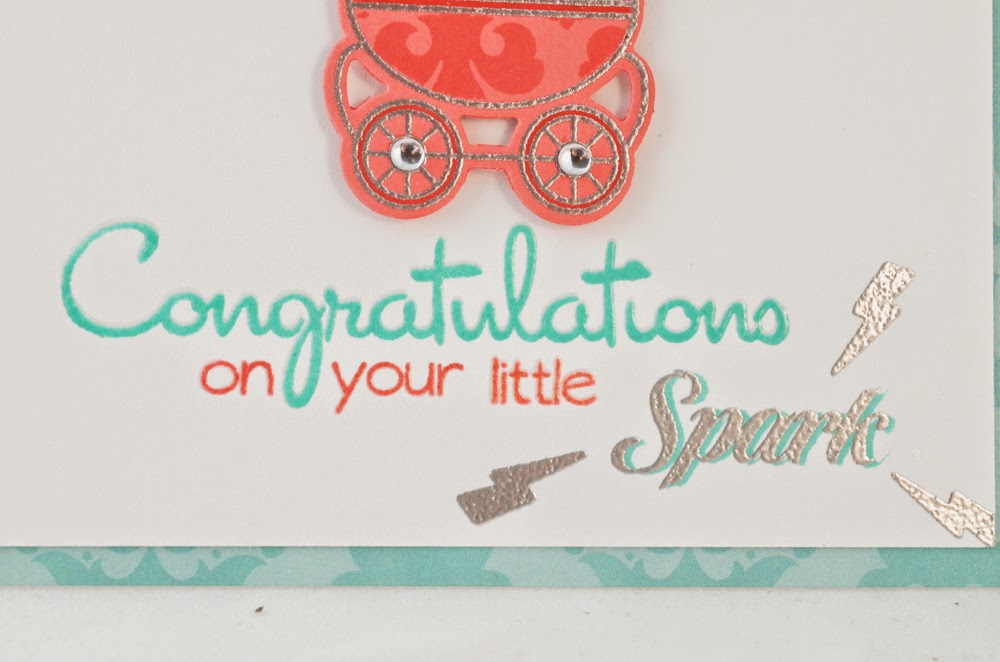 After seeing the embossed word Spark, I felt like it just didn't stand out well enough.  So I decided to stamp it again in matching ink for a shadow.  I also clear embossed the rest of the sentiment so it would also "pop" a little more.

The little "sparks" coming from the baby buggy are probably self explanatory, but I feel I should enlighten you on the reason for the lightning bolts.  My girlfriend and her husband have a dog named, Lightning, who they adopted from the pound.  Until now, he has been their baby.  Her nail salon is named after the dog, and she has a tattoo of a lightning bolt on her foot in his honor.  I'm sure that, as soon as she sees the card, she will immediately make these connections and hopefully be as thrilled to get it as I was to make it!