Playing along today with the Simon Says Stamp Wednesday Challenge: Anything Goes.

They are showcasing Penny Black products this week, so I decided to use my Penny Black Interlocking die. 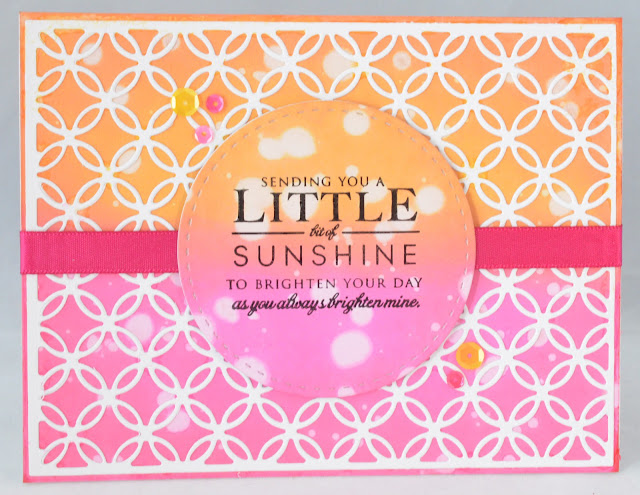 I die cute the interlocking background from Simon Says white cardstock.  The background is Distress Ink on Ranger Specialty Stamping Paper.  After I inked it all up, I flicked some water and Perfect Pearls on it with a paint brush to create the splatter spots.  The shimmer didn't show up in the photos really.

I die cut the circle with a Lil Inker Designs stitched circle die from the inked up paper and popped it up with pop dots on top.  The sentiment is from Papertrey's Hello Sunshine stamp set and is stamped with VersaFine black ink. 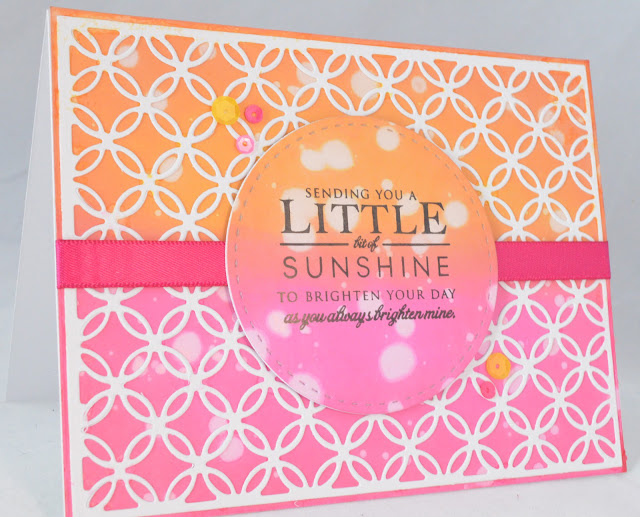 I really wanted the inky foreground and background to be the primary focus, so I kept the embellishments to a minimum.   I think the ribbon is from Papertrey Ink and the sequins are Pretty Pink Posh.

That's it for tonight.  Thanks for visiting!  :)

I'm playing along with PTI today in the July Blog Hop Challenge.  I absolutely LOVE the inspiration photo for this month's challenge! The colors are incredible, the butterflies are awesome, and the layout made me think of a butterfly collector's pin board full of butterflies.  So naturally, I had to pull out my adhesive backed cork and roll with that idea.  :)

I started by die-cutting a mat from the cork using a spellbinders die.  My next step was to pick out some patterned papers inspired by the colors in this photo.  The papers I chose are from a 6x6 pad from My Mind's Eye called Lost & Found Two. 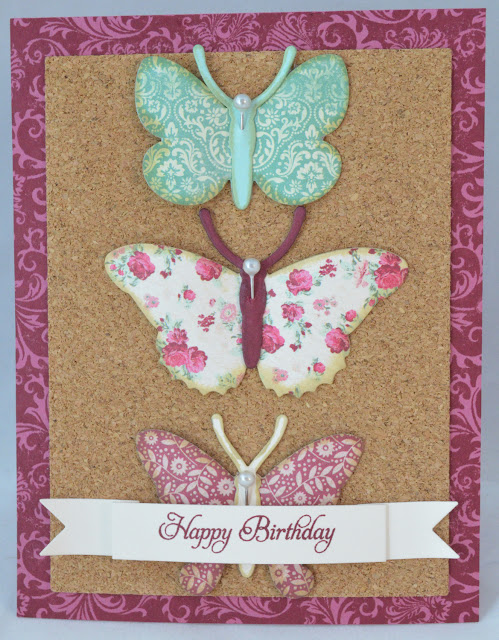 I die cut three of the butterflies from my patterned papers using the PTI Beautiful Butterflies dies.  Since the papers are thinner than I usually work with, I decided to cut them again from cardstock and mount the patterned papers on top for stability.  I die cut their antennas from coordinating colors of PTI cardstock.


I used the PTI Chamomile Tea Die ink pad and a sponge dauber to distress their edges a little bit, and then I used a marker to help curl the wings slightly for dimension.  To make sure my butterflies don't get smashed flat in the envelope, I glued them down with Scrap Dots 3-dimensional glue.  It will support the wings so they don't flatten out. 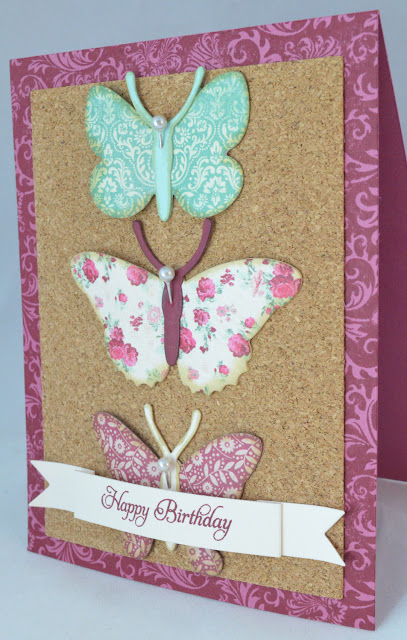 After gluing them down on my paper, I found some straight pins from my sewing supplies and poked them into the butterflies at an angle so they appear to be pinned to the cork "board".  I had to cut the pins down shorter in order to make them lay where I wanted them to.  I added a small drop of Multi Matte Medium from Ranger behind the head of each pin to make sure they won't fall out.

The card base is Autumn Rose cardstock that was stamped with a background stamp from JustRite stamps using Scarlet Jewell ink and my Misti tool to line it up straight.  I already had a little banner strip in my stash of pre-cut shapes, so I stamped the sentiment (from Delightful Dahlia) in Scarlet Jewell ink and used my Score Pal to crease it so it looks like a ribbon or something.  I added a bit of curl to the ends of the banner using a marker again. 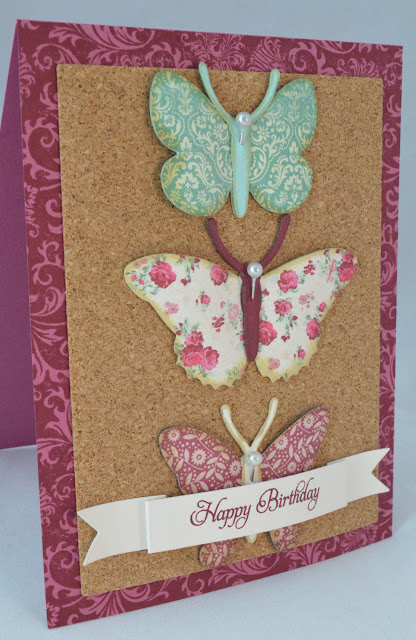 I love how well the stamped card base coordinates with the patterned papers I used on my butterflies.  Originally, I wanted to use Scarlet Jewell cardstock for the card base, but I only have small scraps of it at the moment.  (Time to order more!!)  I thought the Autumn Rose paper was too light and didn't quite coordinate with my patterned papers, so I opted to stamp on it to darken it.  It worked out even better than I thought it would!  :)  I'm very happy with the outcome.

Thanks for visiting!  I'll be fluttering on now.  Bye!
Posted by Hippymom83 at 6:44 PM 4 comments: Links to this post

My son is turning 15 on Monday.  {OMG!  How is that possible?!?!  Did I step through a time warp or something?!?!}  While I was thinking of ideas for his birthday card, I found some inspiration on the MFT blog from this post.  The theme of the challenge is monochromatic color schemes, and since Jake's favorite color is blue, that was my jumping off point.

Jake is also obsessed with video games so, naturally, it needed to be a gamer card.  It's a good thing I have the MFT Game Controller Dies! 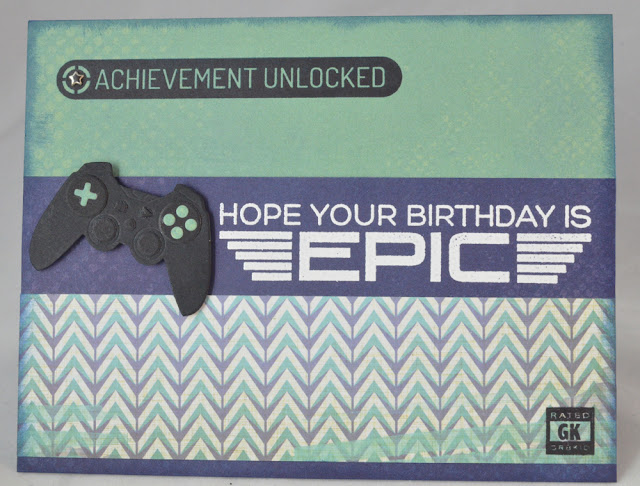 Now, there's just one problem with the Game Controller dies; they look like XBox controllers.  In and of itself, that isn't an issue.  However, we don't have an X-Box.  And Jake is on the autism spectrum and is EXTREMELY literal and particular about things like that.  So I needed to alter the die cut to make it look more like a PS3 controller.

Here is a picture of the die as it was designed to look: 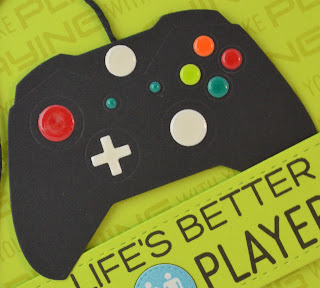 And here is a close-up of my altered version: 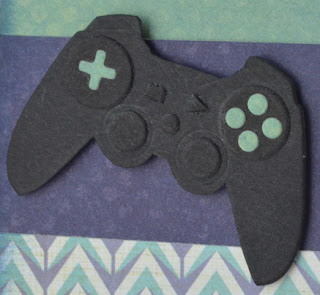 So first, I took a couple of the circles from the larger controller die-cut and covered up the embossed areas that indicate where the 4 buttons on the right are meant to go and the space on the upper left where the joystick is supposed to be.  Besides hiding the embossing, this also created a foundation for the arrow key and the 4 action buttons.  Next, I put a joystick in the space that was meant to be the arrow keys.  Then, instead of the round buttons that go in the upper center, I cut a small black rectangle for the "select" button and a small triangle for the "start" button.  I also added an extra circle to be the power button.  After all of that, I drew some light sketch lines on the top and bottom of the controller to use as a guide to trim it into a shape that looks more like the PS3 controllers that my son has.  Here are pictures of what the real things look like if you aren't familiar with them:


So, any-who, my altered controller looks much more like a PS3 controller now.  Yay, me!  :)  Now I [hopefully] won't get that know-it-all-eye-roll and a lecture about the difference between PS3 and XBox.  Snotty-teenager-moment averted.  You're welcome. 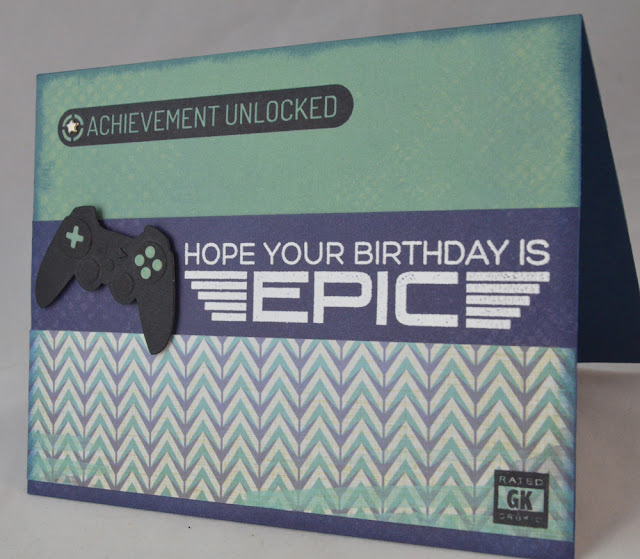 So, about the color pallet.  I looked through my 6x6 paper pads for some fun patterned papers that would coordinate, beginning with the dark blue paper.  The paper at the top looks a lot less green and more aqua in person.  They are all shades in the blue to aqua family.  The sentiment is embossed with white embossing powder.  I chose to stamp the other two sentiments in black to create some balance for the black game controller. 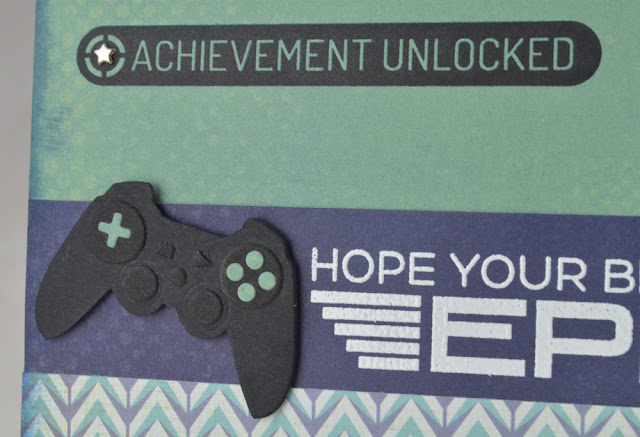 The little crosshair on the top sentiment has a tiny star in the middle, and I just happen to have some tiny star shaped brads in my arsenal of crafty supplies.   [pun intended]  So I thought I'd add that little bid of flair to the image.

By the way, the tiny rating image at the bottom of the card says GK for "GR8KID".  So cute!!  [I'm hoping it doesn't lead to another snotty-teenage-moment of complaining that we don't allow him to play the M rated games that "all the other kids are allowed to play".  "If all the other kids were allowed to jump off of bridges, would you want to do that too?  And what kind of parent lets their 14-year-old play M rated games anyway?!?!"]

So that's it for my monochromatic, XBox-transformed-to-PS3, snotty-teenage-gamer card.  ;)  I hope you have an epic day!  Bye!


Posted by Hippymom83 at 1:17 AM No comments: Links to this post

Just a quick post today.  I'm entering this card in the Make It Monday #217-Custom Borders Challenge and ColourQ Challenge #297. I started by cutting the buttons from the Nostalgic Notions kit and stamping them with Pure Poppy, Enchanted Evening and Hawaiian Shores.  I attached them to the edge of my card base and then backed them with white paper to make them pop.  I added a strip of Pure Poppy paper to hide the seam.

I cut the flowers from the Nostalgic Notions kit from white paper and stamped them with the same colors as the buttons.  The lighter shades are the result of stamping off once on scrap paper.  The leaves are stamped directly on the card base with Classic Kraft ink.

I added a sentiment from the same stamp set using Hawaiian Shores and Pure Poppy, as well as the little corner images. 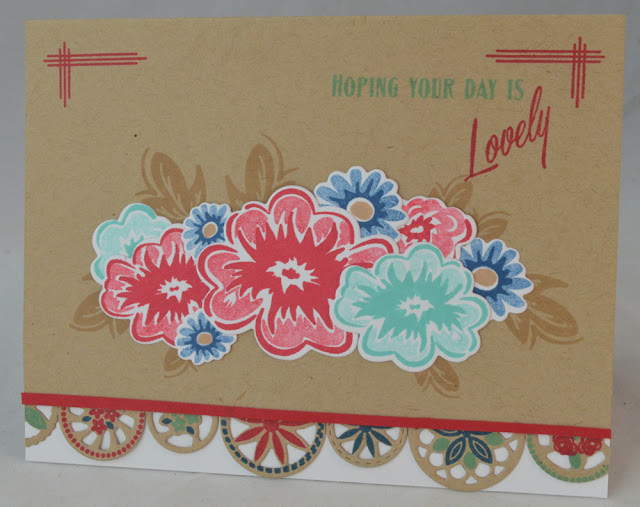 All products used are Papertrey Ink.

That's it for today!  Thanks for stopping in!
Posted by Hippymom83 at 9:13 PM 6 comments: Links to this post